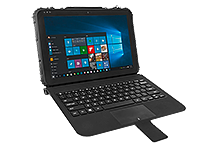 The devices named as "Uniq Tablet II" and "Uniq Tablet IIs" are specifically designed for use in harsh environments and protected against the ingress of dust and water by an IP65 rated enclosure. In addition, the MIL-STD-810-G certificate attests to insensitivity to shocks and vibrations. Operation is via a capacitive multi-touch display, which comes with a tempered cover glass and is therefore insensitive to scratches and cracks. The handy PCs do not require fans and can still be used in a temperature range of -20 ° C to + 60 ° C.

The base models of the "Uniq Tablets" include an Intel Cherry Trail Z8300 CPU and 4GB DDR3 RAM and 64GB eMMC data storage, 2x USB 2.0 and 1x USB 3.0 for the 12.2 '' version or an Intel Cherry Trail Z8350 CPU, 2GB DDR3 RAM and 32GB data storage and 2x USB 2.0 on the smaller Uniq Tablet IIs version. Both industrial tablets have an RS-232 interface. Wi-Fi, Bluetooth 4.0, 3G, LAN, GPS, integrated front and rear camera, as well as mini HDMI, an integrated microphone and loudspeaker are also included in the scope of delivery.

Special features offer the versions with a powerful Intel Kaby Lake m3 CPU with a clock rate of 2.6 Ghz. Besides 128 GB of eMMC memory and a second serial interface, the 12.2 '' version also offers dual batteries with hot swap technology for battery replacement during operation.

The hardware can be customized on customer request with the help of memory extensions, NFC, barcode or matrix code readers and fingerprint scanners. It is also worth mentioning that communication via cellular networks can be increased to the faster 4G standard by means of a module exchange.

The scope of delivery can be supplemented by an extensive range of accessories. Options include a docking station, keyboards, anti-glare film, extra batteries, stylus pens, car chargers, hand straps, and mounts.

The tablets are delivered in standard with Android 5.1. Windows 10 Pro 64 or Windows 10 IoT Enterprise 64 are alternatively available.